Not all Thai girlfriends tell lies. However, many of the ladies investigated by us are found to have been committing acts of infidelity, and this usually entails telling some form of untruths to their partners. We have put together this list detailing some of the most common fibs told by Thai women based on our experience.

If your Thai girlfriend has already been married to a foreigner and subsequently divorced, it’s not likely that she will be entirely honest about this. Women that are involved with “farangs” don’t tend to be upfront about their relationship history, and you may never fully understand your Thai girlfriend’s past relationships. We have seen many different cases that fall into this category. In one instance we discovered that a Thai lady was still legally married to her foreign husband; when she was confronted by her new boyfriend she claimed that even though the couple had split up she had agreed to remain legally married so that her husband could continue to (fraudulently) renew his Thai marriage visa. Lying about having been married can also help to create justification for requesting a higher sin sod (or ‘dowry’) payment, as women that have never been married tend to ask for larger dowries.

Checking the marital/divorce history of your partner is easy for us to do and typically included as part of a background check. 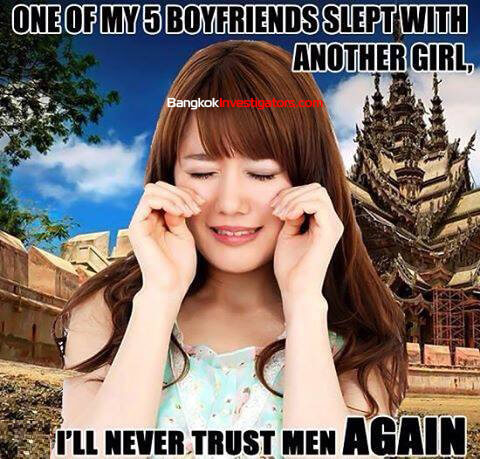 This might seem like a shocking point but is something that we see surprisingly often. Thai ladies that are looking for a serious relationship with a foreigner sometimes lie about having children. They might claim only to have one child whilst they in-fact have two or more. Knowing that their boyfriend is unlikely to visit the village where her children live means that it’s easy to get away with this lie, and in some cases Thai women can conceal children for many years if they weren’t upfront at the start of the relationship. We would typically check whether or not a Thai woman has children as part of a background check.

Lying about being a ladyboy

Some readers will find this point hard to believe and understandably so. While it might be a stretch to describe this lie as ‘common’, we have seen a surprising number of instances where this has happened during our decades of experience in Thailand. Ladyboys that have had surgery on their genitals can occasionally manage to convince their boyfriends that they are biological women. We’re not talking about men in drag here… Years of female hormones and high-quality plastic surgery can make ladyboys very difficult to distinguish from biological women. At the time of writing it is not possible for ladyboys to change their legal identity from ‘male’ to ‘female’, so if you’re having doubts, check your girlfriend’s ID card and see whether ‘she’ started off life as a ‘he’.

‘The Thai girl pregnancy scam’, as it’s known, is an age-old tactic that has been used for many years and will likely continue to flourish in the future. If a Thai woman is keen on you or wants you to take your relationship with her more seriously, then she might claim that she has ‘missed a period’ and that she is pregnant. Lying about pregnancy can be a short-winded scheme used to encourage the man back to Thailand or into a relationship, however we have seen other examples where the scam can involve fake pregnancy tests and doctors that are in on the scam. It is a particularly unpleasant scam that we often see unfold. If a Thai woman that you barely know is claiming that she’s pregnant with your baby then you need to deeply question her motives and whether or not she is telling you the truth.

Whilst it’s difficult for us to demonstrate this statistically, we have learned from experience that many families (especially those in the northern provinces of Isan) have debt, and sometimes significant debts with relatively high interest rates. We find that Thai women are not often honest about having financial difficulties early on in a relationship, for obvious reasons. It is thought that owing significant amounts of money can push some Thai women to work in the sex industry.

Lying about their age

In our experience it’s not uncommon for Thai women to lie about their ages when they are dating or looking to start up a new relationship. Their belief is that by claiming to be slightly (or a lot) younger they will make themselves more appealing to the opposite sex. Thai women often appear to be younger than they actually are, and with the aid of well applied makeup, this trick can work surprisingly often.  Whilst relatively harmless, this is another common lie that Thai women tell their foreign boyfriends. If you’re having doubts, ask to take a look at the date of birth shown on her ID card or passport.

Lying about falling in love

Do Thai girlfriends lie about being in love? Of course, and it’s easy to understand why. Those three words can mean a lot to some men and can really help to solidify a relationship. Foreign boyfriends are seen as very desirable by many Thai women and by claiming that they’re in love early on in a relationship, the hope is that this can help to form a strong bond with their partner.

There is good and bad in all people, and Thai men are no different. Some Thai men make caring husbands, some don’t. If a Thai woman tells you that ‘all Thai men are no good’, there is usually a reason behind her saying that. Why does she prefer foreigners? It’s also common for Thai women to be in secret relationships with Thai men whilst developing romances with foreigners. The lady might introduce her Thai boyfriend to the foreigner as her friend or family member. If you can’t speak Thai, it’s near impossible to figure out whether or not you’re being told the truth.

We regularly investigate women that are claiming to be studying at university, that are not. Similarly, if a Thai woman has been working in the nightlife scene for a number of years, it’s unlikely that she will be honest about her past activities. Bar girls have always been working in the job for “a couple of months”. It’s easy to underestimate the lies told by a professional scammer. For example, if a Thai girl is a fake university student, she will typically fill her Facebook page with photos of her inside a university. We have seen women that claim to be working regular jobs at restaurants or cafes actually borrow someone else’s uniforms in order to pose for photos and convince their boyfriends that they are working there. The mentality that “it could never happen to me” means that foreign men usually fall for this type of scam hook line and sinker.

Learn more about Bangkok Investigators on our homepage.